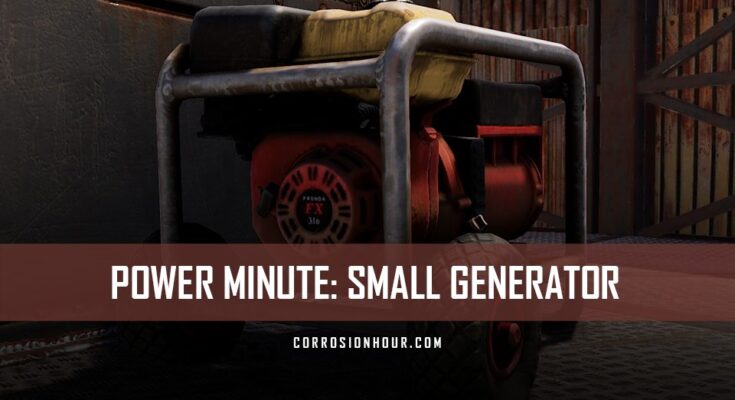 This quick RUST guide video, RUST Power Minute: Small Generator, is brought to you by our partners Malonik & Gal.

In this video series, they take on the challenge of introducing, explaining, and showing you how individual components are used in the RUST electrical and water systems, within 60 seconds.

In this video, they tackle the Small Generator component, which is primarily used for drawing in and sustaining small amounts of power.

Howdy Rusty boys and girls, welcome to the RUST power minute where I have 60 seconds to teach you everything you need to know about a given RUST component, coming at you every day until we’re done. Still working on power sources.

Today we’re having a good look at the small generator, troublesome to find these boys, but simple enough to purchase them from the outpost. Rather cheap, like your mum and the 125 scrap to buy and an extra 75 to research.

These lucky little generators get to live indoors, making them safe from unsavory nakeds and gentlemen raiders. They’re pretty petite so you can tuck them into some fairly cozy spots. Since Facepunch is making it harder by the patch to run power down into caves, they’re the most reliable source of power for cave bases.

They put out 40 power each, but the cost is steep, looking at 250 low-grade per hour, with no variation in generation compared to use, it burns for 40 and nothing less.

To put it to work, it’s best to think of them as a burst of temporary power. You might only have two solar panels on the roof, but you can have as many of these inside as you like. Connect them to a trigger, powering raid defenses, or whatever you fancy.

It’s this functionality alone that makes them worthwhile, alongside a standard power output, it features a separate on and off switch, and for those who don’t know the pressure pad doesn’t necessarily have to be powered to activate a generator and a little thing for setting up internal security.

These videos are good fun to make, so I’m gonna keep making them if there’s a particular circuit you want to see, leave a comment, or visit the Discord.

The Discord’s alright, some pretty cool people on there. Well, look, a couple of cool people. A few too many of those clingy types that just hang around, you know.