Our RUST Oil Refinery guide aims to answer your questions surrounding oil refineries, how to acquire them, where to find them on the map, and how to maximize their use. Oil refineries are a critical component to progression in RUST because air, water, and land vehicles require copious amounts of low-grade fuel in order to operate. End game raiding components also require low-grade fuel to craft, meaning that players will find themselves consistently in need of ways to acquire low-grade fuel.

This guide will cover the following topics:

What is the RUST oil refinery?

The Rust small oil refinery, referred to as oil refinery in-game, is a deployable item that processes crude oil and converts it into low-grade fuel. Much like a small or large furnace operates, an oil refinery takes the crude / raw product and uses wood as a fuel source. Oil refineries are the only method available for converting crude oil into usable low-grade fuel.

How to get an oil refinery

Players can acquire and use oil refineries in a handful of ways. The most economical way to use an oil refinery is to locate one at a monument and process crude oil on the spot. While convenient during a monument farm, this method of refining crude oil is high-risk and time-consuming, depending on the distance from the refinery to a player’s base. Most players would prefer to deploy refineries within the safe zone of their own bases and compounds to ensure the safety of their fuel production.

There are several ways to acquire oil refineries for use inside of player compounds. Some methods are more accessible than others, but we’ll list them all below.

Purchase an oil refinery with scrap

Players can purchase an oil refinery from an outpost vendor for 125 scrap. Buying an oil refinery is a quick, relatively cheap method for acquiring the refinery in the early game to begin low-grade fuel production or getting the blueprint memorized early on.

On busy servers, the relatively low stock count of the refineries may result in this item being out of stock frequently, which means that this method may not always be an option. It is best to use this method as a quick means to get at an oil refinery with the intent to research it.

Another method for obtaining an oil refinery is to unlock it via the workbench tech tree. Players will need to have deployed a Tier 2 Workbench (or have access to one) to access the proper tech tree for unlocking the oil refinery. The oil refinery is the 11th item in its tech tree branch, so prepare to farm up to 1025 scrap for the research cost to unlock each item in the path, including the refinery itself.

Once the oil refinery blueprint has been unlocked, you will need access to a Tier 2 Workbench to craft refineries for use.

Find an oil refinery as loot

Oil refineries are also found as loot in higher-tier crates, including elite crates, military crates, locked crates, and oil rig locked crates. The chance of finding a refinery in these containers is considerably low, so do not rely on this method as your only path to acquiring an oil refinery.

What is the most cost-effective method for getting an oil refinery?

If scrap farming is your top priority at wipe, it will not take you long to collect enough scrap to purchase a refinery from the outpost. Even with the service charge of drone delivery tacked on, it’s the cheapest to buy the oil refinery. That said, if you are playing on a busy, high-pop server, it’s more than likely the case that the outpost stock of refineries will sell out, meaning you will have to resort to researching your refinery.

Your next priority should be to save up scrap to craft the Tier 2 Workbench, a research table, and scrap to research the refinery you purchased from the outpost to craft and produce refineries as you need them.

Here is the total cost to blueprint the oil refinery:

You should note that the 500 scrap for the Tier 2 Workbench is not required in the path to blueprint the oil refinery. However, if you are researching your only refinery, you will want a means to craft a new refinery as soon as possible, which means having that Tier 2 Workbench ready to go.

Even with the Tier 2 Workbench cost tacked on, this method costs considerably less scrap to blueprint the oil refinery than using the tech tree option alone.

How to use an oil refinery in RUST

Oil refineries, unlike the recycler, can be player-acquired and placed within player base compounds. The catch to their deployment is that they must be placed on terrain, so leaving a triangle foundation open to set a refinery on is a common technique for indoor refinery use. Larger compounds with high external walls protecting an enclosed courtyard can cluster many refineries in a group to improve low-grade fuel output rates.

To refine crude oil, do the following:

The oil refinery will continue to process crude oil until all oil is converted into low-grade fuel or it runs out of wood to burn. Each container of crude oil that is processed will produce 3 low-grade fuel and charcoal as a by-product of burning wood.

Like a furnace, if the stack of low-grade fuel or charcoal reaches the stack size limit, the refinery will shut itself off to protect against refined products falling to the ground and despawning.

Where to find RUST oil refineries in monuments

Much like the recycler, oil refineries are found in various monuments throughout the game map. The table below provides a quick, visual guide of which monuments have refineries located in them. Read on for detailed directions to help you find refineries at each of the monuments that host them.

Which monuments have oil refineries?

The following list of monuments have deployed oil refineries for player use:

Full list of Monuments with and without Oil Refineries 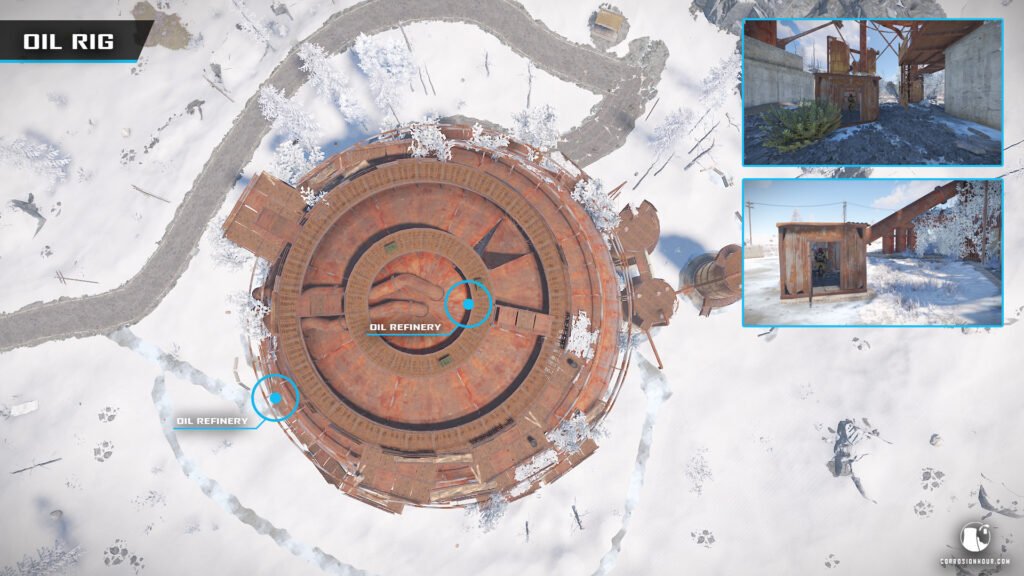 Oil Refinery Location at the Outpost 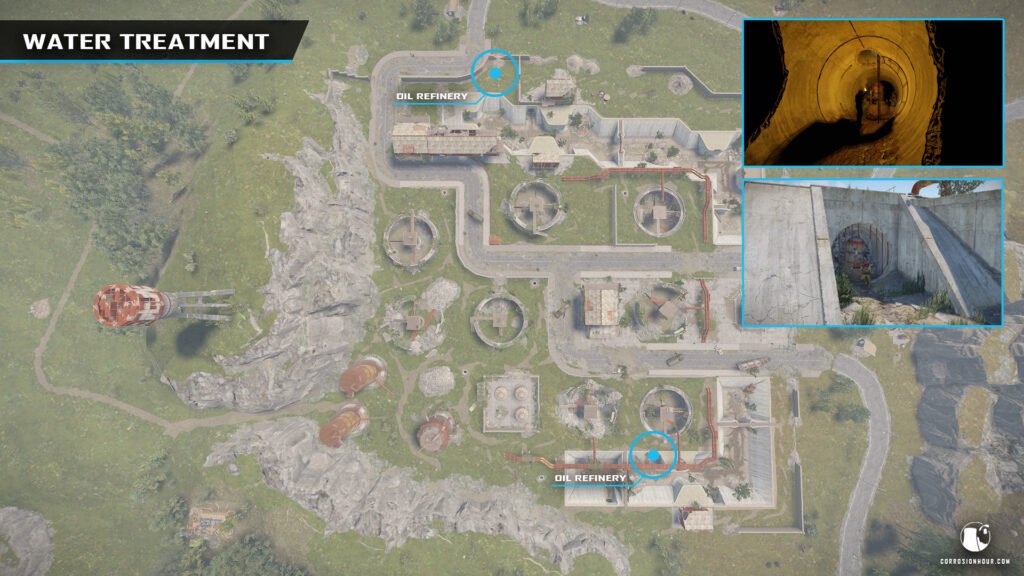