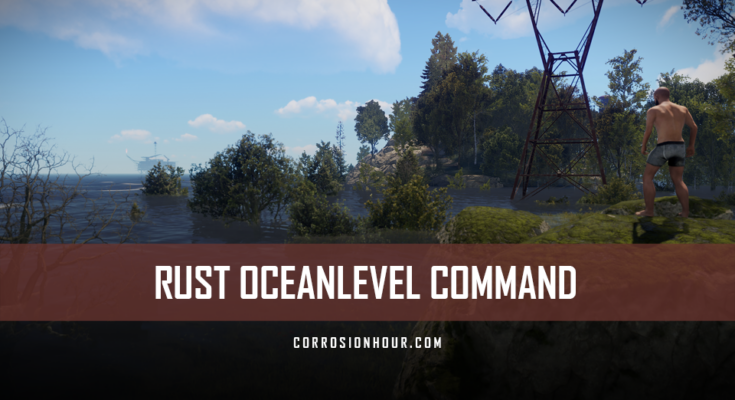 The RUST oceanlevel command, introduced to the game in the CCTV Update, gives the server’s administrators the ability to raise and lower the game’s ocean levels instantly. Up until this command was implemented, ocean levels were a hard-coded value, in which there was no customization, apart from custom made maps where the ocean level could be defined but not modified on-the-fly.

With this new command, RUST server admins and custom map makers alike can get creative with their servers and map design decisions, to create unique experiences that utilize the oceanlevel command.

A few practical reasons for using the RUST oceanlevel command:

Who can enter the RUST oceanlevel command

The RUST oceanlevel command can be issued on vanilla RUST servers by server administrators only. It requires access to the server console. Non-admin players cannot use the oceanlevel command to set the ocean level, but they can type oceanlevel  into the F1 console to see what the current oceanlevel is set to, which can provide players an indication as to what direction the oceanlevels are moving if they are incrementally raising or lowering. This is especially useful in the dark or in remote areas that cannot see the water levels.

How to use the RUST oceanlevel command

Before initiating the oceanlevel command, you will want to take into consideration many aspects of your server. The oceanlevel command can cause havoc immediately and will have a significant impact on your server’s players, many of which can be negative. Keep in mind that this RUST server variable is experimental.

Open the server console and type in the specific oceanlevel command syntax listed below, then press enter.

Use this command and variable to immediately set the game world’s oceanlevel.

Note that this RUST admin command works from the in-game and server consoles, as well as 3rd Party RCON platforms.