Introduction to the RUST Map 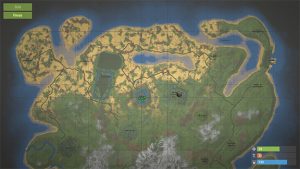 Similar to other survival genre games, the RUST map can be massive. There are many identifying objects on the map, some that are static and others that move in real time. For new and experienced RUST players, it’s critical to learn and understand the vast landscape. With this knowledge in hand, you can begin to take advantage of the environments surroundings.

RUST’s map topology will vary based on the specific server’s seed or the custom map that’s been configured. When official RUST updates are released, there’s always a chance that the procedural generation algorithm has been modified, which can cause non-custom maps to generate new topologies.

It’s important for RUST players to learn how to navigate the ever-changing environment. RUST’s map is available to everyone in-game. It displays a detailed topological view of the game server. The map can be accessed by all players, at any time, while connected to a RUST game server.

The map is critical for communicating specific locations, areas of interest and target destinations. It can be used in building purpose-driven strategies for a wipe cycle or developing raiding tactics. While the RUST map has many different uses, it provides players who understand it many advantages.

How to use the RUST map

To open the RUST map, simply press the letter G on the keyboard, while connected to a RUST server. This is the default key binding for the RUST map. The key binding can be configured through the game’s input options. When the letter  G is held down, it will keep the map open and visible. When the map is open, it will cover the character’s visibility to the world, while some areas of the interface will remain visible.

Once the map is open, use the right mouse button to drag the map in the preferred direction. This will allow a player to pan their view of the map, as for most server’s the map is larger than the screen’s resolution allows. The mouse wheel button is used to zoom in or out of the map. Scrolling up will zoom the map in, while scrolling down will zoom the map out. This can be used to focus in on a specific area, allowing for a more detailed view of the focused area.

To close the RUST map, simply release the letter G on the keyboard. Once it’s been released, the map will automatically close and the character’s view of the game world will be restored.

In Devblog 181 the RUST map was updated to include an optional static overlay grid and coordinate system.  By default, the grid is disabled but can be turned on by clicking the Grid button. Each section of the grid measures 150 meters in width by 150 meters in length. The sections are lettered along the horizontal axis and numbered along the vertical axis. These coordinates allow teams to call out more accurate locations than ever before.

The focus button, also located in the top right of the map, will focus the map on to your current location. When zoomed in or panned out of view of your location, the map will re-focus so that your position is centered on the map. If you’re on an edge of the map or not already out of view, you may not notice the map re-focusing.

In order to configure the default map key, navigate to RUST’s options screen. Then select the Input sub-section and scroll down to Inventory category until the option Show Map is visible.

There will be two configurations available on the far right of this option row that can be selected. The first configuration is the primary key, which defaults to the letter G. The second configuration is a secondary key and is empty by default.

Click on the configuration you wish to set, then press the corresponding button to be bound. On success, the selected button will be displayed for the primary or secondary configuration.

The table below identifies many unique objects that are found on the RUST map. Having knowledge of these objects will help in mastering the harsh RUST environment.

A brief history of the RUST map

In previous versions of RUST it was required for players to craft a paper map first, then place it in their hot bar or right click on it while in the inventory to view it. The map also had a fog of war and didn’t display the entirety of the map. Players were required to explore the world while having a map in their inventory and then the map would keep a record of your travels and remove the fog of war.

The first version of RUST maps allowed players to draw on them. Losing a map at this time was serious business, as maps were often great sources of intelligence. Players would add data to the map, such as base locations, worthy targets or already raided targets. RUST maps have come a long way and shifted the game’s meta into a new phase.

A note about game modes and the RUST map

It should be mentioned that the vanilla map contains features that may not be present in different game modes. For example, the hardcore game mode completely disables the mapping system in order to make navigating the game more difficult for players of this game mode. The map features described in this guide may not be present in your game mode, so be aware that the information here may not apply.

When using the RUST map remember to pay attention 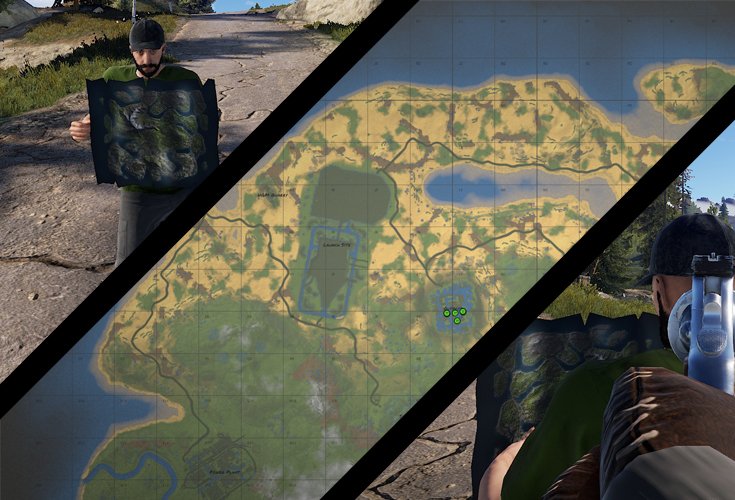 Don’t forget, the game is still continuing around you while the map is open!

It’s important to remember when the map is open that you’re vulnerable. Players and NPCs alike won’t think twice about taking advantage of a player sitting still. Make sure to take cover before opening the map and always be aware of your surroundings.