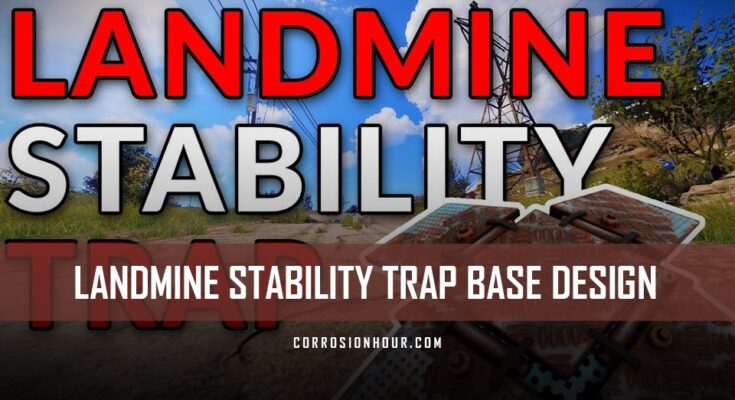 The RUST Landmine Stability Trap Base

Introducing, the RUST landmine stability trap base, a RUST trap base design brought to you from our partner Malonik.

This video will walk you through what landmine stability traps are, how they work and will showing it in-action. Malonik’s explanation is simple and crystal clear. We’re certain you’ll jump onto this technique in this wipe cycle! If you come up with your own landmine stability trap design, be sure to visit Malonik’s discord and submit it for a chance to win a prize.

Hey guys! Mal here and today I’ve got a sneaky trap mechanic to show you.

This mechanic can be implemented into a whole bunch of different designs however to test it out we used it to fully automate a shop trap. None of that having to break out twig yourself nonsense, you can just sit back, relax and let the trap do its thing like this.

Now the beauty of this mechanic is that it’s completely invisible. Also, it can be implemented into so many different designs, so it shouldn’t be easy to identify the fact that it’s a trap.

Let’s take a look at how this works. At its core this is a stability trap so the idea being that once the support for the floor is broken the floor no longer has enough stability and thus it breaks and drops the victim into the trap.

The down side to stability traps is that they either have to be manually triggered like most of the trap designs out at the moment. Or you need something to trigger them for example the shotgun traps in the Bundy Trap Base.

However, the issue with using something like shotgun traps is that they need to have line of sight on the target in order to be triggered. In other words, you couldn’t use it in a space like this because a shotgun trap won’t be able to see the target.

So, the question is how do we get a trap to trigger without having line of sight on the target. The answer is this beautiful @#!$ right here, the good old landmine.

Now obviously landmines aren’t invisible, and people aren’t going to willingly step onto them if they see them. So, we need to find a way to hide them in plain sight. Thankfully gal already worked his wizard magic and found this little trick.

Place a half wall down in twig, put a landmine on top of it and now put floors down and upgrade them to stone. This hides the landmine completely inside the floors but still allows it to be triggered when walked over.

I’d also recommend throwing a shotgun trap down in there because if the target has full kit and is at full health the landmine won’t quite finish them off.

Furthermore, you might want to consider adding shotgun traps that point to where they enter from like this. It stops any mates they might have with them from getting to their body.

The easiest and quickest way to know if it’s going to work or not is by trying to place the flooring without the half wall down. If it keeps breaking then you’re good to go, where as if it successfully places then something else is supporting it.

Have fun with it and I’d love to see what you guys come up with. I’ve created a channel in my discord where you can post screenshots of your designs. I’ll be checking out each and every one of them and my favorite might even win a prize.

To finish up here are a few different ideas that gal and I came up with on how this trap mechanic could be implemented and used.