Wetsuits are part of a much more comprehensive diving set, added during the Compound Update back in May of 2018.

Probably the most desirable part of the diving set, wetsuits are a favorite clothing alternative to traditional pants and hoodies for those living in the winter biome. They boast remarkably good cold weather and radiation protection, but far and away their best utility comes in the form of making you waterproof. This is quite beneficial in an area where being wet at night quickly turns deadly.

Whilst wearing a wetsuit, you are allocated the same anti-wet protection as the Hazmat Suit, except that you can wear things like Jackets and Wood Armor at the same time. Unlike the Diving Fins or Diving Masks, they don’t have a land-based downfall other than occupying two clothing slots that are potentially more fashionable.

Acquiring wetsuits in RUST is relatively straight forward with them being acquired in quite a number of ways. In addition to being purchasable at any Fishing Village monument for 20 Scrap, they also spawn in several crate types and can be dropped by scientist NPCs.

While not common practice to recycle as most pairs simply end up as ground clutter, doing so will yield a small number of Metal Fragments early in a wipe cycle.

As far as general appearance, they appear as you would expect them to – as a standard divers wetsuit, black in color.  They are currently not a skinnable item type. 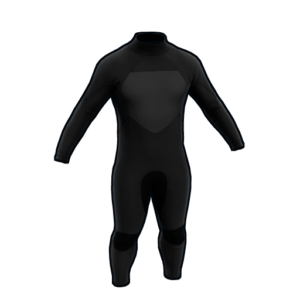