The RUST Tesla Coil is a deployable electrical entity used to allow electrical power to be converted to raw arcing power, capable of damaging nearby players. Facepunch added electricity components in the Electric Anniversary update on the 7th of December, 2018.

Players may deploy tesla coils on most surfaces. When using a Wiring Tool to check for ports, players will find a single Power In. They require a minimum of 1 power to function and cap out around 35 electricity being weaponized.

Tesla coils are most commonly used for base defense or as an anti-doorcamp mechanisms but are also popular in trap bases. In addition to damaging players, they also damage themselves so long as they are powered.

Tesla Coils may be found in an assortment of mid-to-high tier crates, as well as drops from a wide range of scientists. Players may also research them directly, buy them from Outpost at a cost of 75 scrap,  or invest scrap into the Tier 1 Workbench tech tree to learn this item. 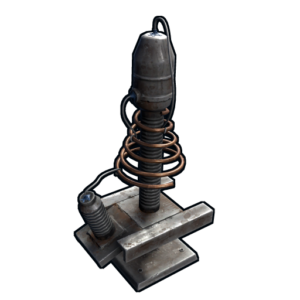