The RUST SUPER Stocking, a player deployable event-exclusive device, is available to the RUST community every December with the Season’s Beatings! event. Its primary purpose is to auto-generate seasonal loot when the event triggers, allowing players to partake in the seasonal fare.

Players may deploy them on walls or other vertical flat surfaces on which they have proper Tool Cupboard authorization.

Once deployed (while the Christmas event is live), players may notice that in sync with jingle bells going off and presents spawning around them that the SUPER stocking has begun to shine. It may then be looted of its contents in anticipation of the following jingle when the pattern will repeat.

SUPER stockings take 10% durability damage every time they are refilled in this way until they finally break on the 10th looting.

The RUST SUPER stockings are exclusively acquired from Large Presents by players. 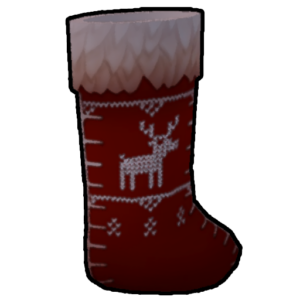