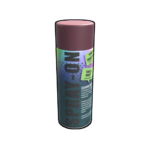 The RUST Spray Can is a hand-held re-skin implement, spawnable via the F1 console by administrators and available to be crafted as a default blueprint. Facepunch added this item during the Arctic Update in February of 2022.

The spray cans primary purpose as of its release is to re-skin base deployable aspects without the need for removing them and placing them inside a Repair Bench.

While holding the spray can, players may look at a skinnable item, press the Right mouse button, and an overlay window will appear with all of the skins that the player has for that item. Once selected, the previously unskinned (or alternatively skinned) item will now take the appearance of the new skin without the normal damage associated with picking the item up.

There is a function not yet in the game whereby players will be able to imbed decal stickers into the spray can and graffiti their design on player-built structures for a short period and a drawing feature that is still a work in progress. Every time the re-skin function is used, the spray can take a small amount of damage until finally broken. If used for no other purpose, spray cans are good for 20 re-skins.