The Snowman Helmet is a craftable full-head covering available for players to purchase from the in-game RUST store during the Season’s Beatings! event in December of 2021.

A low-tier form of headwear, the snowman helmet has defensive statistics identical to those of the Headset. Because it is a full-head covering, it doesn’t allow for pairings with other defensive items such as the Bandana Mask. It may be used in conjunction with cosmetic Sunglasses.

While not as protective as other helmet types such as the Metal Facemask, it offers sizeable early wipe protections from radiation and cold for a very low Cloth resource cost. It may be recycled for half what the crafting cost.

The helmet may only be obtained and crafted by those who purchased the Steam Item from either the RUST store or Steam community store. They do not require a workbench to craft. The snowman helmet is also spawnable via the F1 console by server administrators.

The appearance of the snowman helmet is one of a wintery nightmare, making the wearer appear as though they have the head of a very angry snowman. 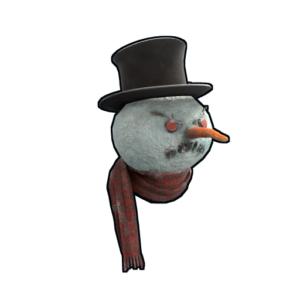