The Smoke Grenade is a stealth/raiding implement in Rust. Similar to the 40mm Smoke Grenade, the smoke grenade creates an obscured grey cloud area around its canister when deployed. Players may still shoot into the cloud but can’t visually pierce it.

Smoke grenades are pretty handy during raid defense. Smoke grenades can prevent effective ranged defenses if players are firing from windows or the roof.

You can also use the smoke grenade to obscure players from the view of Auto Turrets, CCTV Cameras, and other automated defenses. In addition, they make wonderful decoys to throw off enemy players and help add chaos to the mix during active raids.

Alternatively, you can purchase smoke grenades from the Outpost monument for five scrap pieces and recycle them. At a recycling rate of 5 scrap to 18 Gun Powder, the smoke grenade is one of the best scrap-to-gun-powder exchanges in Rust.

Players may learn the blueprint for smoke grenades directly or through investing scrap into the tier 1 workbench tech tree. 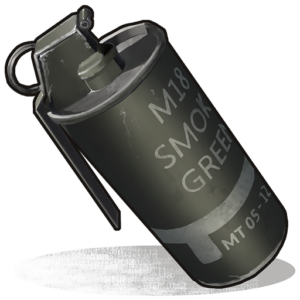