The RUST Smart Alarm is a deployable electrical entity used to link in-game happenings and allow players to trigger a said switch from their real-life phone via the Rust+ Companion App.  Facepunch added electricity components in the Electric Anniversary update on the 7th of December, 2018.

Players may deploy smart switches on most surfaces. When using a Wiring Tool to check for ports, players will find an Electric Input, Switch On, Switch Off, and Output. As the name implies smart switches are used to allow players using the above-mentioned app to remotely turn on or off attached devices.

Requiring 1 power input to function, the premise is fairly simple; once paired (check out our smart device guide), if a device such as an Auto Turret or lighting system is attached and contingent upon the power being passed through the smart switch,  players can use the Rust+ App to turn these systems on or off.

Smart switches may be found in an assortment of mid-to-high tier crates, as well as drops from a wide range of scientists. Players may also research them directly or invest scrap into the Tier 2 Workbench tech tree. 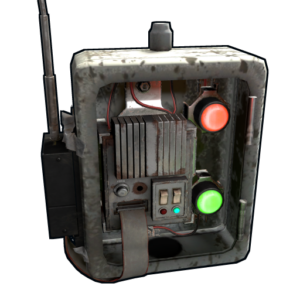