Players may deploy small generators on relatively flat surfaces. When using a Wiring Tool to check for ports, players will find a single Power Out port, as well as Force Star and Force Stop.  They generate 40 electrical power at a time while running and will continue until turned off, destroyed or deleted of fuel.  The most prevalent use for the small generator currently is raid defense as one generator can power up to 3 turrets at a time.  Players also use them to supplement normal electrical generation in cave bases for lighting and defense.  They may be picked up and can hold up to 500 Low Grade Fuel at a time.

Small Generators may be found in an assortment of low-to-high tier crates, as well as drops from a wide range of scientists.  Players may also research them, buy them directly from Outpost for 125 Scrap,  or invest scrap into the tier 2 workbench tech tree. 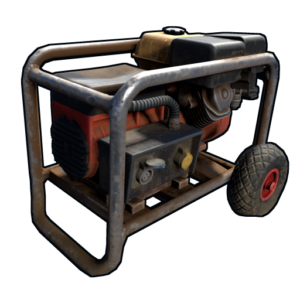