The RUST Search Light is a deployable electrical device used by players to blind the ever-loving hell out of their neighbors and raiders. The primary original intent can only be assumed, to act as a beacon to signal to other planets….just kidding.

The search light illuminates a great distance in a straight line and can be mounted by players to point in a rather fluid radius around its base. They may be used in sequence and require a whopping 10 electricity to power. It becomes a permanent fixture once placed. Server administrators beware, these entities use a considerable amount of resources and can cause stuttering, FPS drop, and lag if used in large enough numbers.

Search lights are found in an assortment of mid-to-high tier crates, as well as dropped from many scientist types. RUST players may learn them directly or through a scrap investment into the Tier 2 Workbench tech tree. 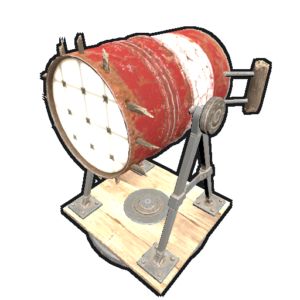