The Scarecrow Wrap is a player wearable mask that drops during the RUST Halloween event and is a re-skin of the Wolf Headdress, which was originally added to the game during Halloween 2018. The mask was integrated alongside the Scarecrow Suit as the visual basis for the new Scarecrow NPC that stalked the land for the duration of the event.

The scarecrow wrap is a direct re-skin of the Wolf Headdress, with all of the accompanying defensive statistics minus the capacity to use a Bandana Mask with it.  In addition to appearing terrifying, it also lights up the users’ eyes at night, making you a very easy target in the dark.

The scarecrow wrap is on the official RUST Halloween loot table, available as a drop from the seasonal Loot Bags, as well as from killing the new Mummy NPCs. 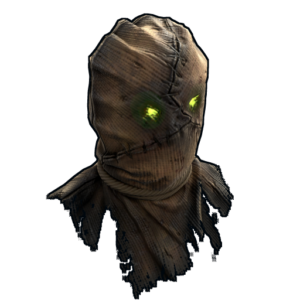