The Scarecrow Suit (originally Costume) is concept-centric work in progress initially added to the game during Halloween 2018. The suit itself has integrated that same patch as the visual basis for the new Scarecrow NPC that stalked the land for the duration of the event.

Now simply a relic of a time gone past, what with the newer Mummies added, the Scarecrow Suit is now exclusively available via F1 console spawning. It is a direct reskin of the Wetsuit, with all accompanying defensive statistics and the capacity to have armor worn over it. This also makes it Waterproof. Quite beneficial in an area where being wet at night quickly turns deadly.

As far as general appearance, this one is another RUST admin favorite for scaring the wits from their dutiful server patrons. You appear as a large, glowing-eyed Scarecrow like a terrifying page written from a demented Wizard of Oz. 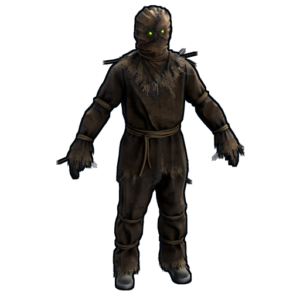