The Santa Hat, not to be confused with the closely named Santa Beard is a head covering with its most recent visual update coming with the Season’s Beatings! event of 2016. If you look up during the event, you may even see Santa donning this hat as he cascades across the night sky with his sled and reindeer.

The Santa hat is a direct reskin of the less-than-popular Bone Helmet, acting as a cheap face cover that RUST players may find during the holiday season. It provides a limited amount of armor to the player’s head area, leaving much to be desired. At the same time, it definitely screams festive!

The Santa hat covers the top of a player’s head and may be paired with the Bandana Mask for additional projectile and cold protection.

Santa’s hat may only be found during the Season’s Beatings event from Small Presents, or from Small or SUPER stockings. 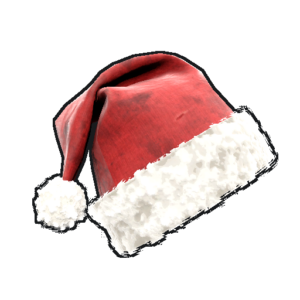