Reindeer Antlers are a seasonal RUST Christmas item, introduced to the community in December of 2017.  Along with Santa Hats and Candy Cane Clubs, they have been a staple in the RUST winter arsenal ever since.

Like a wearable piece of holiday flair, the reindeer antlers surprisingly boast some protections, with defensive stats exactly the same as the Burlap Headwrap. Unlike said headwrap, players may pair the antlers with other items like the always popular Bandana Mask to improve their protection.

While this item can’t be researched or crafted, players may find them when looting both Small and SUPER Stockings, as well as from opening and looting Small Presents.

The reindeer antler’s unique appearance makes the wearer resemble a person wearing reindeer antlers on their head, complete with the Rudolph Red Nose. 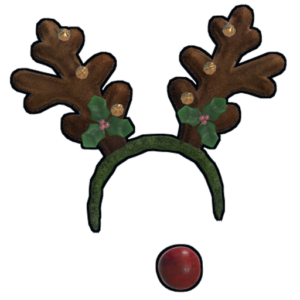