RUST Raw Wolf Meat is an edible item obtained through skinning a dead wolf carcass. This is the less palatable version of Cooked Wolf Meat and may be ‘improved’ by applying fire (such as a Camp Fire or Barbeque) to it and heating until done.

Overcooking will result in Burnt Wolf Meat being produced, which is much less beneficial (and appetizing… yuck.)

When consumed, raw wolf meat will restore 20 calories and damage the player significantly over time. In addition to wolves in rust providing a viable chicken alternative, their carcasses also can be used to make an assortment of fashionable hats!

For more information on how to get food in RUST, check out our Food Guide! 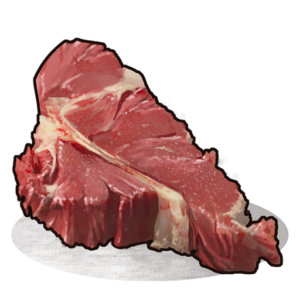