The RUST RAND Switch (random) is a component used for creating RNG-based output. When activated, the switch has a 50% chance to allow power to pass through and a 50% chance of not allowing it.

While using a Wire Tool to check available ports, players will find the standard Power In and  Power Out and as well as SET and RESET. Think of the RAND switch like a regular Switch except that instead of having a simple on and off toggle, it has to hook up to two separate switches to do the same job at random.

Inputting power into the SET function ‘rolls’ a chance for the RAND switch to activate, allowing passthrough until power is fed to the RESET port, thus restarting the whole process. It is completely random whether it will turn on or not every time you pass power to it via SET. Unlike similar switches such as the Memory Cell, if the SET rolls ‘false’ or ‘off’, it will turn off the power.

RAND switches are found in an assortment of low-to-mid-tier crates, as well as dropped from many scientist types. RUST players may learn them directly or through a Scrap investment into the Tier 2 Workbench tech tree. 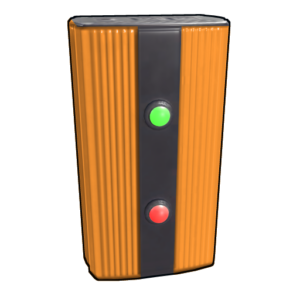