The Pistol Bullet is one of the three types of pistol ammo available in RUST. This ammo type is the primary type used with day-to-day pistol weapons such as the MP5A4 or the Custom SMG, as well as in base defense for things like Auto Turrets. While not having quite the range and accuracy as HV ammo, traditional pistol ammo remains the prevalent type used due to its relatively cheap crafting cost for the yield.

You can find pistol bullets in many types of crates or as loot from certain NPCs at mid-to-higher-tier monuments. While there are no in-game stores in RUST that directly stock pistol ammo, players may sell this ammunition from their Vending Machine shops.  Pistol Bullets are also the standard bullet type that comes preloaded when a gun such as the M92 Pistol is purchased from NPC shops or when crafted by a player.

Pistol bullets recycle into roughly half of their crafting cost but are unlikely to be recycled in bulk due to their overwhelming popularity and unmatched usage. It is the premier ammunition type for use in Auto Turrets for base defense.

Weapons that use Pistol Bullet 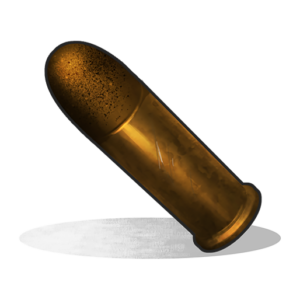