The Pattern Boomer is a craftable, giant mortar-style firework available for players to purchase from the in-game Permanent RUST store added during the Season’s Beatings! Event in December of 2021.

Unlike other firework varieties in-game, the pattern boomer is the first of its kind to have a deployable artistic feature incorporated into its use. Players that deploy and interact with the pattern boomer once it’s on the ground will have the opportunity to paint a picture that will be transcribed to the sky once the firework is lit via Torch strike or Igniter. Players may also save their designs for use on other fireworks later.

Fireworks are an excellent way to make Scrap by selling them through an in-game shop. Selling via a player store is made much easier since the RUST Marketplace update. 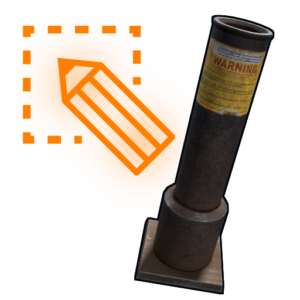