The RUST Paddle is primarily a tool used for paddling a Kayak, but can also be used as an early-game barrel smacking tool in RUST. This item is a favorite among the safe zone farming crowd as it isn’t considered a hostile weapon and may be used to smack barrels or roadsigns within the vicinity of any safe zone type without repercussion. Hitting a player or non-animal NPC will still result in your immediate murder.

While not usable as an animal farming tool, the melee range of the paddle is unparalleled. For perspective, wielding this item and attempting to hit someone in front of you might land a successful blowup to a full foundation square away (and it packs a punch).

As mentioned, it is also the only way of paddling the kayak, although it is used far more as a barrel smacking tool. Players may even use it to kill animals in the safe zone and then harvest them with a Rock afterward. 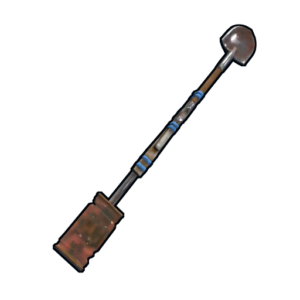