The Nest Hat is a re-skin of the popular Wolf Headdress introduced to the RUST store during the Easter Event in April of 2020. While statistically identical, the appearance is the polar opposite of its more animalistic cousin with the nest hat having physics-dependent bouncing googly eyes.

While probably on the rare side of probability, the assumption could be made that a zerg could raid using the nest hat for ranged identification purposes. They boast decent defenses and can be paired with the Bandana Mask, achieving the same projectile protection as the popular Coffee Can Helmet.

The Nest Hat maybe be purchased from the RUST item store during the Easter Event window if tradition continues to hold or bought from other players on the steam store. It does require a Wolf Skull to craft, making it a bit more expensive early wipe than alternative options. 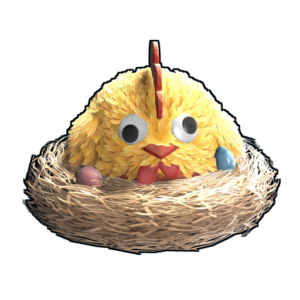