The RUST Nailgun is a low-ranged, medium rate of fire gun in RUST. It is mainly used on wipe day as an efficient finishing weapon due to its relatively cheap crafting cost and silent firing.

The nailgun is more of an enigma than any other firearm spawnable under weapons – it is the only weapon that requires Scrap to craft, and despite being a default blueprint, it requires a Tier 1 Workbench to make.

Unless you are engaged in close-quarter combat, the nailgun will be of limited use.

Being the only ammunition type for this weapon, the Nailgun Nails have exceedingly limited range and drop after a very short distance. It takes multiple headshots to incapacitate other players.

Ironically, despite being used almost exclusively in early game combat, nailguns are only found in elite crates or on heavy scientists. They must be crafted otherwise.

Ammo used by the Nailgun 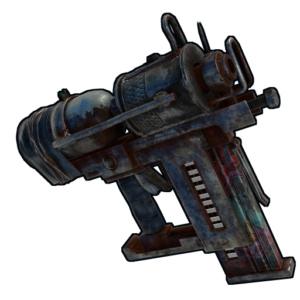