The RUST Muzzle Boost is a weapon attachment that allows players to modify their gun’s rate of fire. Simply put, the muzzle boost will slightly increase the rate of fire of any firearm in the game by roughly 10% while decreasing both its damage output and velocity by the same amount.

The alteration is most viewed with guns that naturally shoot quite fast, such as the MP5A4, making the amount of ammo downrange considerably faster but much harder to control. If you liken this to a raid defense scenario, coupled with an alternate ammo type such as the incendiary, the muzzle boost can quickly change the tide of battle.

RUST players may acquire a muzzle boost through a number of mid-to-high tier crates, locked crates, or as drops from scientists. Players may also learn them directly via researching or investing considerable Scrap into the Tier 2 Workbench tech tree. 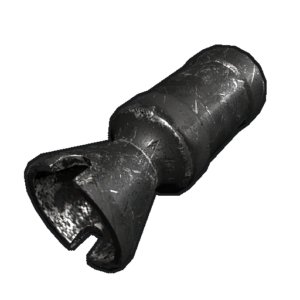