The RUST Memory Cell is a deployable electrical storage gateway (trigger) device that allows for electrical current passthrough to two different sources depending on its toggled state.

While using a Wire Tool to check available ports, players will find the standard Power In and Output, as well as Inverted Output, Set, Reset, and Toggle.  An easy way of understanding the difference between Output and Inverted Output is as viewing each as a logic gate.

Once the memory cell is switched from green/red to green/green, it can only be reset via the RESET port, with it receiving a power signal from a Switch.  If you want to cut down on redundant switches, both can be changed via the TOGGLE feature.

Memory cells are a vital part of many electrical trap bases. The device itself can be placed on most surfaces.

Memory cells are found in an assortment of low-to-mid-tier crates, as well as dropped from many scientist types. RUST Players may learn them directly or through a Scrap investment into the Tier 2 Workbench tech tree. 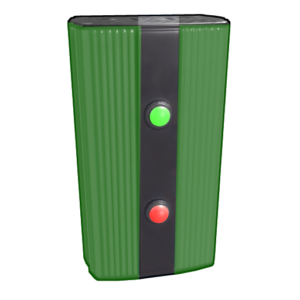