The RUST Medium Rechargeable Battery is a deployable electricity storage device used as a backup for power systems in the event of failure.

Medium rechargeable batteries are the second-highest volume (9,000 rWm) battery type, capable of outputting relatively high power (50) at a time. They are the mid-tier choice for power backups and electrical storage for clans and private base builders that plan on using Auto Turrets, SAM Sites, and other assorted electrical systems. You simply need to employ more of them to compensate for not using Large Rechargeable Batteries.

Medium rechargeable batteries are typically used as backups for raid base defenses and in trap bases due to their fairly common drop nature. They are widely recycled in the early portion of wipes due to their resource output.

Medium rechargeable batteries are found in an assortment of low-to-high tier crates, as well as dropped from many scientist types in RUST. They can also be purchased directly from the Bandit Camp monument at a cost of 75 Scrap each. Players may learn them directly or through a small Scrap investment into the Tier 2 Workbench tech tree. 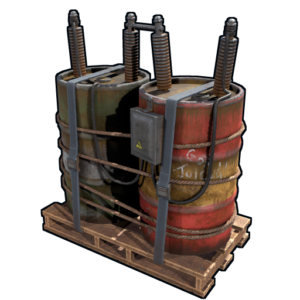