The RUST Large Solar Panel is a deployable electrical generation device used to create power for base security and light systems.

Despite what the name implies, there are currently no small solar panels in the game files. Large solar panels are more frequently used as primary power on smaller bases or as backups that can be combined with Wind Turbines for extra power output. Once placed, energy can then be used directly (not advisable) or stored in a battery bank such as the Large Rechargeable Battery.

A single large solar panel is capable of generating up to 20 power at a time depending on the orientation of the sun. Since the sun in RUST rises in the east, transitions across the sky towards the north, and finally sets in the west, large solar panels generate the most power when facing the northeast and northwest skies.

Large solar panels are found in an assortment of low-to-mid-tier crates, as well as dropped from many scientist types. Players may learn them directly or through a Scrap investment into the Tier 1 Workbench tech tree. 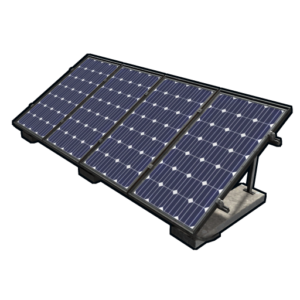