The Incendiary Rocket “Incen” is one of three rocket types compatible with the Rocket Launcher.  This rocket holds the distinction amongst the three as the most likely to be recycled as it yields an extremely high amount of Low Grade Fuel and Gun Powder, as well as a chance for Explosives.

In addition to being used offensively, they are excellent base defense weapons for temporarily stopping advances into a breach with large areas of fire.  Users be cautioned the nature of incendiary rockets is random, and the fire produced on impact can quickly spread to a sizable area rather fast.

While not commonly crafted in RUST, they can be learned via the Research Table or by investing significant amounts of Scrap into the tier 2 tech tree.  Incendiary rockets can only be found in Bradley APC and Patrol Helicopter crates, meaning that obtaining them early game can be extremely difficult.

Weapons that use Incendiary Rocket 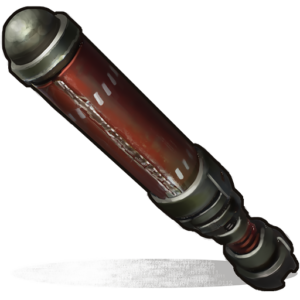