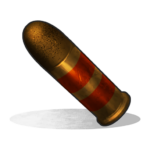 The Incendiary Pistol Bullet is one of three types in RUST and can be subcategorized as more PVP-focused ammunition for pistol-type weapons. This bullet-type can better penetrate heavy plate armor sets and periodically deal additional damage to players through on-contact fire spawns.

Incendiary pistol bullets recycle for roughly half of their crafting cost, higher than Pistol Bullets but slightly lower than HV Pistol Bullets. Players may research them via a Research Table or the Tier 2 Workbench tech tree. In addition to being compatible with all pistol-using weapons, they are also famous for base defense via Auto Turrets.

As mentioned prior, incendiary pistol bullets are ideal weapons for combating players using a heavy plate or horse armor. Unfortunately, due to their drop rate, they are less accurate over longer distances than their Pistol Bullet or HV Pistol Bullet counterparts.

Weapons that use Incendiary Pistol Bullet