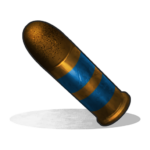 HV Pistol Ammo is one of the three types of pistol ammo available in RUST. This ammo type is typically less used with day-to-day pistol weapons such as the MP5A4 or the Custom SMG. Still, it remains useful earlier in a wipe cycle for hitting targets at a greater distance before players have access to sniper rifles.

While the benefit of using HV ammo is evident, it comes at the cost of higher crafting materials per bullet.  While this is offset more with the 5.56 equivalent, it is quite rare to see players go out of their way to craft this pistol ammunition type.  It is more feasible to craft regular pistol ammo than the HV variety.

You can find HV pistol ammo in many different types of crates or as loot from specific NPCs at higher-tier monuments. While there are no in-game stores in RUST that stock HV pistol ammo, it’s common for other players to sell this ammunition type from their Vending Machine shops.

HV pistol ammo recycles into roughly half of its crafting cost. It is common for players to recycle this type of ammo in bulk, especially later in the wipe cycle, due to its limited use compared to traditional pistol ammo and the high volume that drops from Attack Helicopter crates. While Auto Turrets can use this ammunition for base defense, this isn’t usually the case due to the higher crafting cost associated with this ammo.

Weapons that use HV Pistol Ammo