The HV 5.56 Rifle Ammo is one of four types of 5.56 ammo available in RUST. While less commonly used with day-to-day 5.56 weapons such as the semi-automatic rifle or the assault rifle, the high velocity ammo type is the proven favorite for sniper rifles like the Bolt Action Rifle or the L96 rifle. Like other high velocity ammo types, HV 5.56 rifle ammo boasts a significant reduction in drop over long distances compared to regular 5.56 rifle ammo.  It also travels faster to the target, making for easier shots from greater distances.

While the benefit of using HV 5.56 ammo is evident, it comes at the cost of higher crafting materials per bullet.  This is offset slightly due to the sniper rifle weapon types having considerably smaller magazines than their assault rifle counterparts, resulting in fewer bullets being used overall.

You can find HV 5.56 rifle ammo in many types of crates or as loot from certain NPC’s at higher tier monuments. While there are no in-game stores in RUST that stock HV 5.56 rifle ammo, players may sell this ammunition from their Vending Machine shops.

HV 5.56 rifle ammo recycles into roughly half of its crafting cost and is quite likely to be recycled in bulk due to its limited use compared to traditional 5.56 rifle ammo and the high volume that drops from Bradley APC and Attack Helicopter crates. While it can be used in Auto Turrets for base defense, this isn’t usually the case due to the higher crafting cost associated with this ammo.

Weapons that use HV 5.56 Rifle Ammo 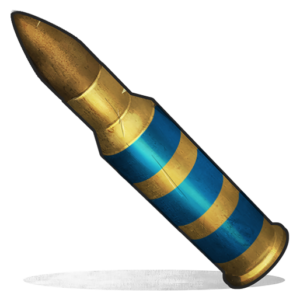