The High Velocity Rocket, or “HV Rocket,” is one of three rocket types compatible with the Rocket Launcher. This rocket is the preferred method (cheapest) for destroying the Bradley APC most conveniently, taking only 700 Gun Powder and 7 Metal Pipes to craft adequate ammunition. They are also renowned for their capacity to destroy base traps such as Auto-Turrets and Shotgun Traps from safe distances.

The HV rocket is unique among rocket types, as it is the only one that doesn’t require Explosives to craft. Because of this, it has quickly become known as the ‘PVP Rocket,’ with players destroying Bradley APC often using leftover HV’s to defend their loot.

HV rockets boast the ability to immediately kill players even if not directly impacted, as they have a relatively large area of effect blasts. However, their most significant PVP utility comes from the damage they can do to player vehicles. Because of their increased speed over regular Rockets and Incendiary Rockets, it is much more likely to hit cars or even mini-copters and scrap helicopters from range. The damage done by HV rockets to these vehicle types is often devastating.

High Velocity Rockets have significantly less drop than their counterpart rocket and incendiary rocket but do proportionately less damage to structures in RUST, making them less than ideal for actual raiding purposes.

When recycled, they provide minimal resources but are one of the most sought-after items early in a wipe by large groups as they are far down the Tier 2  Workbench and are extremely expensive to learn via the tech tree. HV rockets are only found in Bradley APC and helicopter crates, meaning that obtaining them in the early game can be extremely difficult yet potentially very profitable.

Weapons that use High Velocity Rocket 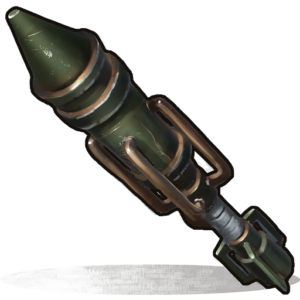