The Heavy Plate Helmet was first introduced to the community during the February 2017 patch alongside its jacket and pants counterparts.  If ever there were an embodiment of ‘tanking’ in RUST, the Heavy Plate set is intended to make the wearer as temporarily invulnerable to small arms fire as possible.

Speaking of fire, it is worth mentioning that while regular and HV bullets might have a difficult time penetrating your high-quality hull, incendiary ammo types, both the Pistol and the 5.56 variety, ignore the damage reduction effects of the Heavy Plate set almost entirely.  When regular ammunition is used, the projectile damage reduction of Heavy Plate is unparalleled.

While the use of incendiary ammunition types in RUST is limited, there are other contributing factors to consider before using this armor type to roam around.  Most notably hindering the speed at which this armor gains popularity is the speed at which it allows you to run… in that it doesn’t.  Players receive a substantial decrease in movement speed when equipping this armor set and have their field of vision drastically reduced to a rectangular shape in the middle of the screen when wearing the helmet in particular.

More conditional but just as impactful as the movement decrease for this set is its cold vulnerability.  Like the more popular Metal Set, the Heavy Metal set makes using this gear in the arctic biome almost taboo, particularly if afflicted by the Wet status. As the proverbial cherry on top, players equipping the helmet will also be unable to ADS (aim down sight) with any weapon and will have to instead rely on things like the Weapon Lasersight to have any chance of hitting their target.

The most significant utility of this armor type comes in the form of base defense, with particular emphasis being placed on damage trading. If the altercation isn’t taking place somewhere cold and wet, and your opposition isn’t using incendiary ammo, a base owner would have a commanding advantage in trading headshots with those shooting at them.

The Heavy Plate Set may be acquired through many avenues, with the most common being military crate or locked crate drops.  In addition to this, it can be found on several different scientist types, by being learned and crafted via the Research Table or through scrap investment down the tier 2 workbench. These pieces recycle for small amounts of high-quality metal and the potential for sheet metal.

Highlighted recently by the community as a popular pairing is Heavy Plate armor while using a horse with Roadsign Horse Armor. This combination makes the rider mostly invulnerable to the more popular bullet types while semi-negating the movement speed decrease associated with the Heavy Plate set. 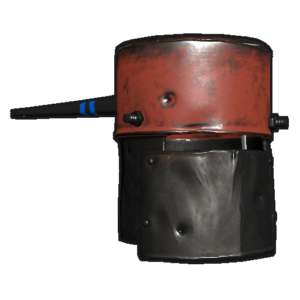