The Headset is a unique head covering introduced during the first RUST Twitch Drop event. Players that dedicated a specified number of hours to watching the Twitch Streamers for said drops were rewarded with steam items that unlock the ability to craft the headset, Purple Sunglasses, and toggle in-game purple undergarments (entirely cosmetic).

While less obstructive around the mouth than similar head coverings, you cannot use this item in conjunction with a Bandana Mask. Despite this, the headset naturally boasts the exact same defensive statistics as the Boonie Hat and bandana mask combo minus roughly 7% cold protection and costs considerably less Cloth to craft.

In keeping with the purple theme of the drops, players that received this drop also received a purple skin variation. Apart from the purple-skinned variant, the headset does not share its model with any other known RUST in-game item. 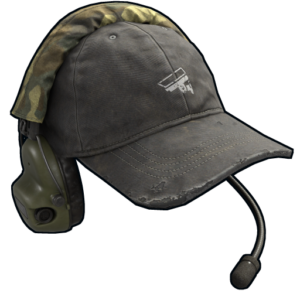