What is the Hazmat Suit

The RUST Hazmat Suit is a multi-purpose armor piece that affords players decent radiation resistance, waterproofing, and other benefits. It has become the unofficial uniform of the RUST franchise. With some of the earliest documented mentions of the hazmat going back to September 2016, if you have played RUST at all, you should be familiar with this multi-purpose armor.

Over the years, the hazmat suit has gone through multiple iterations, starting as a basic yellow and concept art depicting different colors such as red, green, and blue.  Players could only find these handy suits through world drops up until August of 2017, when they became craftable and differentiated from the appearance used by AI.

On the topic of appearance, the first purchasable skin for the hazmat suit hit the in-game store with the Elevator Update in October of 2020. The ever-popular Spacesuit skin started popping up on servers everywhere.

It remained the preferred (and only) alternative skin for players until the introduction of the Permanent Rust Store in November of 2021. This patch introduced the Nomad Suit skin as one of the first not-so-limited-time models to be available on the new store.

The main appeal of the hazmat suit has always been a multipronged fork, chiefly categorized into things like convenience, disposability, availability, and practicality.

How to get a Hazmat Suit

Hazmat suits are acquired through various methods, ranging from standard roadside boxes and crates to scientist loot and underwater treasure chests. As alluded, they are also craftable and recycle quite generously into essential early game components, though their most significant utility comes from the protection they offer from radiation. While most monuments have radiation thresholds easily met via other craftable clothing such as burlap, the Launch Site monument is not easily traversed without wearing this suit.

Because they are readily available simply by looting crates from the open world, they are probably the most utilized ‘kit’ accompaniment armor used today. Their single-slot armor type allows players to go unnoticed by the Patrol Helicopter so long as they don’t have more than a regular bow equipped in their hot bar.

The defensive statistics are decent for a single piece, even though players cannot use this armor type in conjunction with other armor pieces. In addition to this, there is a significant benefit of wearing a hazmat suit, which is its waterproofing. This is very useful in wet and cold climates, where being soaked can cause a player’s hitpoints to drop rapidly.

The hazmat suit blueprint can also be learned via the research table, or by investing a minimal amount of scrap into the Tier 2 Work Bench tech tree. 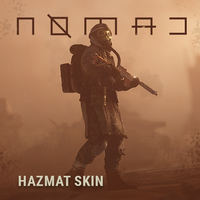 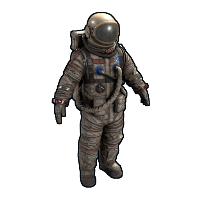