The Flashlight is a player-craftable illumination tool in RUST similar in function to the torch but of a different hue and much more unidirectional.

They produce the same result as a Weapon Flashlight except they are held in hand instead of attached to a weapon. Players cannot use it in tandem with a gun.

The illumination effect produced by the flashlight is considerably less noticeable than that of the torch. The flashlight defies the laws of energy and may run indefinitely without batteries or decay.

In addition to being a default blueprint, flashlights may spawn in crates and carts located around cave entrances. While it is possible to attack with them as a melee weapon, they quickly break and aren’t very effective. 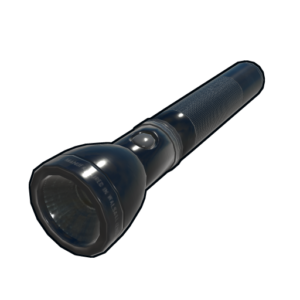