The RUST Empty Propane Tank falls into the component category of items. These components are used in the creation of multi-tiered items, as well as recycle fodder for players to obtain game building and crafting resources as well as Scrap.

Empty propane tanks are lootable from an assortment of crates and barrels, as well as being dropped by both types of underground/water dwellers.

The great utility of empty propane tanks lies in their metal fragment yield, particularly early in a wipe.  Each tank represents the metal fragment equivalent of a Code Lock, probably the most rushed to craft item for non-solo teams.

The major downfall of the empty propane tank is its limited stack size of 5, as well as it only recycling one at a time instead of 2 like comparable components.  While nice to keep stocked for players that plan to craft Flame Throwers for early game raids, empty propane tanks aren’t high on the priority list for on-hand component boxes. 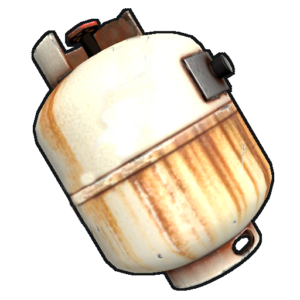