The RUST Electric Heater is a deployable base heating system, part of RUST’s electrical system, and is used to reduce cold and wet effects by providing comfort status. Facepunch added electricity components in the Electric Anniversary update on the 7th of December, 2018.

Players may deploy heaters on most surfaces and use a Wiring Tool to connect to its Power Input and Passthrough ports. They require three power (each) to run and may be wired in a simple sequence similar to Ceiling Lights.

In addition to producing heat that will keep players considerably more comfortable (50% comfort, actually) at night in the arctic and desert biomes, they also produce a small amount of radiant-like red glow while on. They are helpful for intemperate farm locations to keep plants growing in Large Planter Boxes and Small Planter Boxes.

Electric heaters may be found in various low-to-mid-tier crates and drops from many scientists. Players may also research them or invest scrap into the tier 1 workbench tech tree. They may also be purchased directly from Outpost for 75 Scrap. 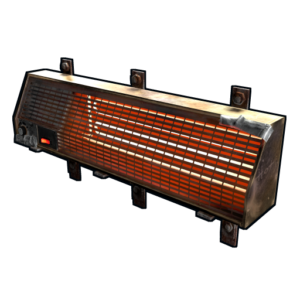