The Dragon Mask, a RUST armor headpiece worn by players, is a promotional item that launched during the Air Power Update in February of 2019 to celebrate the Chinese New Year.

Alongside the Dragon Door Knocker and Chinese Lantern, this was a limited-time purchase available from the in-game RUST store. It has since been discontinued for purchase but can be traded for through the Steam Marketplace.

From a statistically functional perspective, this is a basic reskin of the Wolf Headdress complete with the same cost and defensive capacity. Unlike said headdress, it crafts considerably faster when not under the effectiveness of any tier workbench. When used with a Bandana Mask, it gives you the same protection as the Coffee Can Helmet, but with considerably improved cold protection at the cost of one more armor slot.

The only way to acquire this item in the game aside from administrative F1 Console spawning is to own the Steam item and craft it.

The Dragon Mask’s unique appearance makes the wearer resemble a person wearing a dragon face on their head. 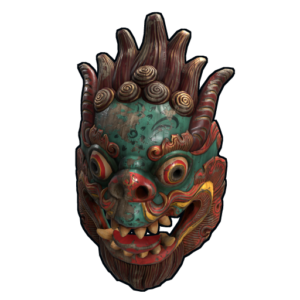