Diving Tanks are part of a much more comprehensive diving set, added during the Compound Update back in May of 2018.

While this chest covering offers no defensive statistics of any kind, they allow players to submerge themselves fully in a variety of water types for up to 10 minutes. Unlike the Diving Fins or Diving Masks, they don’t have a land-based downfall other than occupying an armor slot that could better be used by something with statistics, such as the Jacket.

In addition to swimming, they are also an alternative to submarine users that wish to stay submerged longer than the default breathable air within the cab allows.  Also, extremely handy if you’re 200 meters underwater and your submarine co-pilot tries to convince you that there is a horn function… and you press the spacebar key.

Acquiring diving tanks is relatively straight forward with them being acquired in quite a number of ways.  In addition to being purchasable at any Fishing Village monument for 35 Scrap, they also spawn in several crate types and can be dropped by scientist NPCs.

While not common practice to recycle as most pairs simply end up as ground clutter, doing so will yield a small number of Metal Fragments and High Quality Metal early in a wipe cycle.

As far as general appearance, they appear as you would expect them to – as a standard divers tank. They are currently not a skinnable item type. 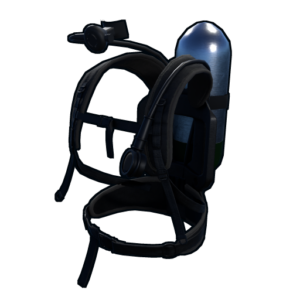