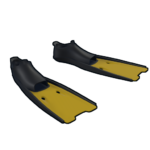 Diving Fins are part of a much more comprehensive diving set, added during the Compound Update back in May of 2018.

While this foot covering offers no defensive statistics of any kind, they do boost your ability to move through any water type by a considerable margin. The one hefty drawback is that they turn you into a proverbial turtle on land, restricting your movement speed to roughly 35% of the normal walk and run speed.

Acquiring diving fins is relatively straight forward with them being acquired in quite a number of ways. In addition to being purchasable at Fishing Village monuments for 25 Scrap, they also spawn in several crate types and can be looted from scientist NPCs.

While not common practice to recycle as most pairs simply end up as ground clutter, doing so will yield a nice amount of Metal Fragments early in a RUST wipe cycle.

As far as general appearance, they appear as you would expect them to – as standard diving flippers.  As of December 2021, they are not currently a skinnable item type.