The Cultist Deer Torch is a player craftable illumination tool in RUST, similar in function to the Flashlight, but of a different hue and much more multidirectional.  They produce a bright, orange glow that can be seen for miles at night.  Introduced during the Halloween Event in October of 2022, it is a reskin of the standard player spawn Torch, possessing exactly the capacity for producing light, but with a fresh new appearance and style.

Aesthetically, there is a lot more going on for the CD Torch than the typical beach-dweller torch.  Although identical in function and durability, the new design has a lot more going on.  Living very much up to its namesake, the cultist deer torch looks more like a ceremonial trophy of some sort.

With the standard wooden shaft as the holdable portion, the visual quickly morphs to a small deer skull adorned at the fire-end, with 2 protruding, leather-wrapped horns sticking out either side.  At the back of the skull is the normal lighting portion of the torch, which when used illuminates exactly as a standard torch does.

Naturally when used, players hold them instinctively near their head to make their face an easier target for night snipers.  It cannot be used in tandem with a gun.

Torches of all types are a default blueprint and spawn with every naked on every vanilla server, alongside the trusty Rock.  While it is possible to attack with them as a melee weapon, they quickly break and aren’t very effective.

This mask is available for a limited time on the Limited in-game store. 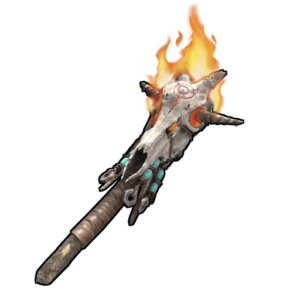