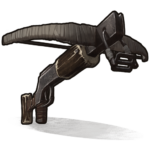 The RUST Crossbow is a medium-damage, semi-accurate midrange bow that is synonymous with early tier gameplay in RUST until players acquire a gun.

The largest differentiation between the crossbow and other bow types is its ability to accept weapon attachments, most notably the Weapon Flashlight. The tradeoff to this is the crossbows fire and reload mechanism that takes considerably longer than that of the Compound or Hunting Bows. Crossbows are a solid wipe day weapon and often the preferred pre-gun option for those with limited bow experience.

Crossbows are compatible with all arrow types and are a default blueprint for all players. They are found in limited toolboxes and loot crate types and very rarely drop from heavy scientists. Players must have access to a Tier 1 Workbench to craft them.

Ammo used by the Crossbow