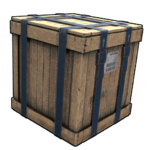 The Crate Costume is a Halloween event-exclusive cosmetic armor type only available during this time frame. It was originally introduced during the 2019 Halloween event and reappears every year.

Similar to the Barrel Costume introduced a year prior, this novelty has no defensive statistics and encompasses every anatomy slot except for feet, making it incompatible with all other armor pieces except for boots.

When the RUST Halloween event is live, it is a potential drop from scarecrow NPCs found throughout the game world.

As far as general appearance, if the crate costume is used on the roadside while crouched, players will resemble… a standard brown loot crate. Crouching is important for failure to do so will expose your ankles and feet and thus the bamboozle would be over quite quickly.