The Concrete Pickaxe is a skin available for the Stone Pickaxe, released as part of Facepunch’s General Permanent Store items with the Lumberjack DLC in the October 2022 The Lumberjack update.  It’s original bundled sale price is listed at $12.99 USD and, like all other permanent item store items, isn’t available for resale on the steam marketplace.

While possessing the exact same collections rates and function as the stone pickaxe, the concrete pickaxe brings a more rustic outdoor aesthetic to the mineral node farming experience.  Constructed of broken-off rebar rods interconnected with fracture concrete slabs, this one-of-a-kind creation could more adequately be viewed as a torture device than pickaxe implement.

As its base item is a default blueprint, the concrete pickaxe would be available immediately to every naked on every beach that purchases the DLC.  Its primary use is to gather Stones, Metal Ore or Sulfur Ore in RUST.  It requires no fuel to operate but takes consistent durability loss while being used to hit nodes or any other entity.

The concrete pickaxe requires players to manually strike nodes to harvest their resources.  It is quite normal to use a pickaxe as a melee weapon, sometimes going so far as to use it as a soft-side raiding tool.  It is not recommended for use with an Ore Gathering Tea due to its limited resource gathering capacity as an entry level tool. 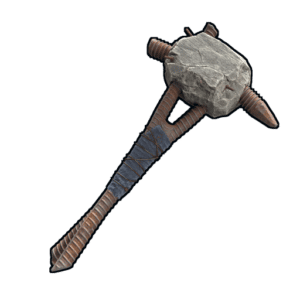