The RUST Computer Station is an electrical device that players can deploy inside their bases and is used to watch and monitor live CCTV Camera surveillance feeds. Players can locate strategically placed CCTV cameras inside various monuments as well as inside and outside of player-made bases. Facepunch added electricity components in the Electric Anniversary update on the 7th of December, 2018.

To view RUST CCTV camera feeds, the computer station requires players to first add CCTV Camera Codes (Identifiers) to the terminal, which can be up to 32 characters long and are alphanumeric and case sensitive. Players may deploy as many computer stations as they see fit but must program each station every time it is deployed. You may only program up to 15 unique CCTV codes at a time per station.

Unlike the camera system itself, computer stations oddly don’t require electricity to power and work as soon as placed. They may be looted from high-tier crates or from an assortment of scientist types, as well as be purchased for 300 Scrap from the Outpost monument. Players may also research them or invest scrap into the Tier 2 Workbench tech tree. 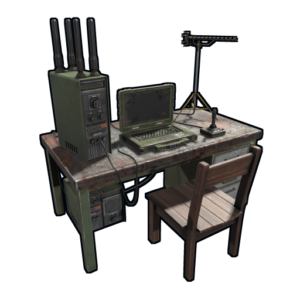