The RUST Compound Bow is a high-damage, highly accurate long-range bow that is synonymous with stealth primitive gameplay in RUST until players acquire a gun.

While behaving very similar in nature to the Hunting Bow, the compound bow also has a drawback feature that increases the impact damage, distance, travel speed, and in some ways accuracy of the shot. The tradeoff to this is that for every second the bow is pulled back and fully charged, the durability of the weapon decreases. In addition to the damage it incurs, players cannot move or switch positions without resetting the drawing action.

Compound bows are compatible with all arrow types. They recently received a rework and are now no longer a default blueprint. They are found in most loot crate types, as well as drops from most scientists. Players may research them directly or invest Scrap into the Tier 1 Workbench tech tree. They require said workbench to craft.

Ammo used by the Compound Bow 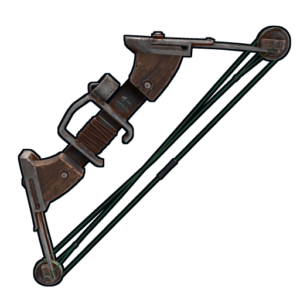