The Champagne Boomer is a giant mortar-styled firework that will launch a champagne-colored starburst pattern into the sky.

Fireworks were available for a limited time through the Facepunch storefront but can now only be acquired through other players selling them on the Steam Marketplace.

Fireworks are an excellent way to make Scrap by selling them through an in-game shop. Selling via a player store is made much easier since the RUST Marketplace update.

You can light your fireworks by individually striking each placed boomer by hitting it with a lit Torch, or you can set up an electrical firework Igniter that will set off all fireworks within a set radius. 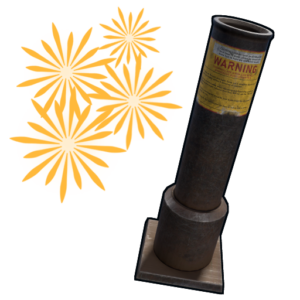